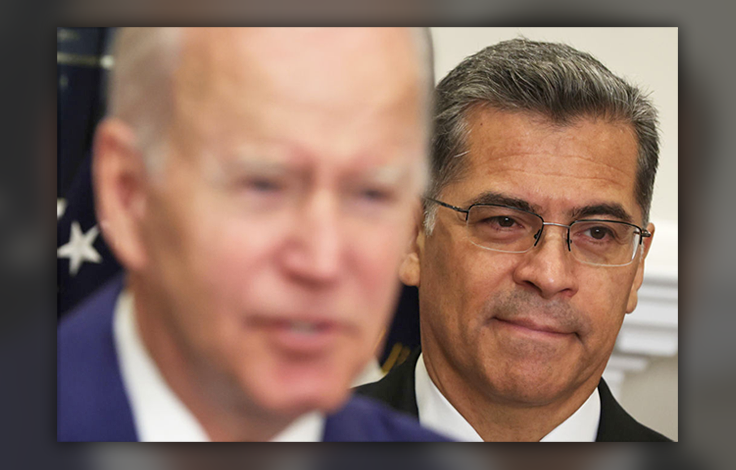 Alas, Becerra probably won’t be fired for the same reason he was hired. Because of his race and the so-called diversity he brings to the administration.

The White House has been fed up with Becerra’s job performance for months and has “openly mused” about replacing him, according to a Washington Post report published in January. Health experts inside and outside the administration complained about his “low profile” and “passive” approach to complex problems. “He hasn’t shown up,” one COVID-19 analyst told the Post. “[He’s been] like a ghost.”

Nevertheless, administration officials were “loath” to give Becerra the axe because doing so “would likely draw the ire of the Congressional Hispanic Caucus and other grass-roots groups that pressed Biden to appoint more Latinos to his Cabinet.”

New York Times reporters Jonathan Martin and Alexander Burns recounted this racially charged pressure campaign in their recently published book, This Will Not Pass. Biden’s search for a health secretary, they wrote, was a “fraught” process characterized by “hurt feelings and [racial] grievance.”

While attempting to assemble “the most diverse cabinet in history,” Biden’s team “panicked” in response to criticism from Hispanic lawmakers who wanted more Hispanics nominated for cabinet-level positions. They “scrambled” to offer Becerra the job—a “hasty choice” explicitly intended to “calm the situation.”

So much for Biden’s campaign pledge to “follow the science” and “shut down” COVID-19 by putting the experts back in charge of the government’s pandemic response. Becerra, a former congressman, was woefully unqualified for the position of health secretary. His most relevant experience involved a lawsuit he filed as California attorney general to force the Little Sisters of the Poor to provide birth control to employees. More than 620,000 Americans have died from COVID-19 on his watch.

Some Democrats complained about the “harried selection process” and viewed Becerra as a “baffling” nominee. They were ignored. House Speaker Nancy Pelosi (D., Calif.) was especially annoyed because she “had worked closely with Becerra in the House and viewed him as untrustworthy.” Meanwhile, Biden chief of staff Ron Klain grew “weary” of the Democratic coalition’s insistence on “treating the cabinet as an identity-politics Rubik’s Cube.”

Becerra’s inability to helm the nation’s health department was glaringly obvious in January, when the Post reported on White House “frustrations” with his leadership. In recent months, the federal government’s response to monkeypox has further vindicated Becerra’s critics who contend the health secretary has absolutely no idea what he’s doing.

The New York Times on Wednesday published a damning report on Becerra’s botched handling of the monkeypox outbreak, which has been hobbled by a vaccine shortage “caused in part” by his department’s failure “to ask that bulk stocks of the vaccine it already owned be bottled for distribution.” The release of the vaccine doses was also delayed because the Food and Drug Administration, under Becerra’s purview, took months to inspect and approve the Danish factory producing the vaccine.

Lawrence Gostin, a renowned public health expert from Georgetown Law who has consulted with the White House on monkeypox, said the government’s response to the outbreak has been “deeply frustrating.” Federal health agencies have been “kind of asleep at the wheel on this,” and continue to struggle with “the same kinds of bureaucratic delays and forgetfulness and dropping the ball that we did during the COVID pandemic,” he told the Times.

The article includes a familiar critique of Becerra’s leadership. Detractors fault his “hands-off approach to an increasingly serious situation,” but weren’t willing to speak on the record. Biden is reportedly “upset” by the vaccine shortage and “stung by criticism that a lack of foresight and management has left gay men—the prime risk group for monkeypox—unprotected.”

Josh Barro, a pro-Biden journalist, observed that the Times article “really makes Xavier Becerra sound incompetent and out to lunch. How did he get the HHS Secretary job anyway? He doesn’t have relevant qualifications.”

UK growth set to be worst in G20 apart from Russia, OECD warns

Biden disagrees with those who call Israel an apartheid state

Inflation is not the only demon