Rickshaw taxi operator Samantha Ajith was fuming as he waited in a 2km queue for petrol in Colombo — now a common sight in Sri Lanka’s biggest city, with motorists waiting for hours or even days.

“The incompetence of the government has caused big problems for us . . . They must leave and let someone else take over,” Ajith said. “They do not know how to manage the economy.”

Policy missteps by President Gotabaya Rajapaksa’s government, compounded by shocks caused by Covid-19 and the Ukraine war, have sparked the country’s worst economic crisis in decades and added to concerns about impending emerging market collapses. “This has been a train wreck in slow motion,” said one investor who holds Sri Lankan debt.

Mounting public anger at worsening shortages of food, fuel and other essentials this week tipped into popular revolt.

Tens of thousands of protesters converged on Colombo on Saturday and crowds poured into the president’s official residence. Rajapaksa has not been seen in public since, and Sri Lanka’s parliamentary speaker Mahinda Yapa Abeywardena said the president had pledged to resign on Wednesday.

Crowds were still streaming in and out of the palace on Tuesday and local reports, citing unnamed government sources, said that Rajapaksa had been stopped by immigration staff at Colombo’s airport on Monday evening while trying to flee to Dubai. His brother Basil, a former finance minister, was prevented from flying out of the country on Tuesday.

Sri Lankans say the emergency has unfolded in plain sight and attribute it to poor choices by their leaders as well as bad luck.

After Rajapaksa won the 2019 election, he enacted sweeping tax cuts that cost the state about SLRs800bn ($2.2bn) in revenues. The measure has since been rolled back. In 2021 the government banned chemical fertiliser imports in an attempt to boost organic farming — another move later rescinded after a sharp drop in crop yields and disruption to food supplies.

The government also kept the tourism-reliant country closed until late last year under a “zero Covid” policy, even as other countries in the region, such as the Maldives, were reopening.

Meanwhile, the shock to world food markets from the Ukraine war pushed up the price of staples such as wheat flour and lentils in Sri Lanka, which relies heavily on imports. But even as rating agencies were downgrading Sri Lanka, the government continued to tap capital markets, piling up new debt as its cash reserves were running out.

In May Sri Lanka defaulted on its foreign debt. As of the end of June foreign reserves stood at $1.8bn, leaving the state with stark choices about importing food, fuel and other essentials. With dollars running out, the central bank has been printing money to cover the costs and inflation is running at about 50 per cent.

Foreign governments and bondholders who own Sri Lanka’s $51bn debt are taking stock of what some analysts believe will be the first of a series of emerging market collapses this year, caused by surging energy and food prices and the global tightening of credit that followed Russia’s invasion of Ukraine.

“The government doesn’t have enough money to meet expenditure, and doesn’t have the dollar reserves to fund imports,” said Nishan de Mel, executive director of Verité Research, a Colombo-based think-tank.

Before Saturday’s unrest, the IMF was in the advanced stages of negotiating an Extended Fund Facility arrangement for Sri Lanka. This would unlock new loans, allowing the country to import supplies and give it credibility in talks with creditors on restructuring the debt. 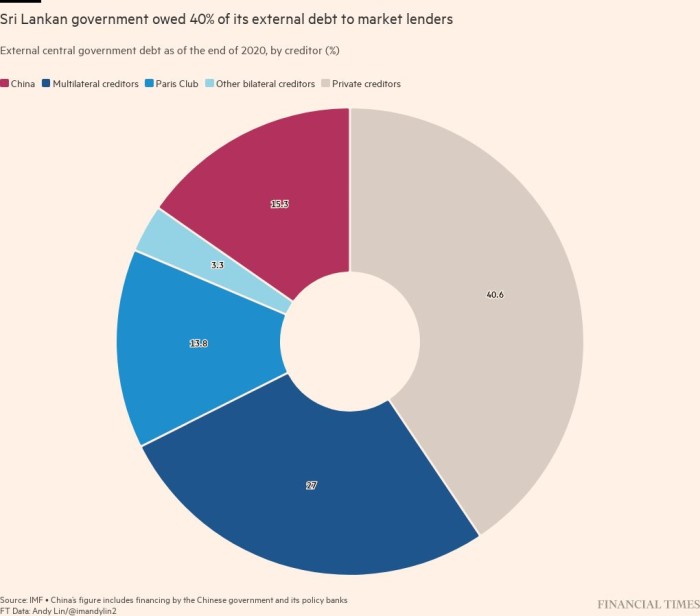 The IMF declined to comment, referring to its statement on Sunday in which it said it was “deeply concerned about the impact of the ongoing economic crisis on the people” and that it was continuing technical discussions with the finance ministry and central bank.

The shortages in the country now encompass everything from jet fuel to cooking gas and pharmaceuticals.

As the crisis escalates, an international rescue plan has become both more urgent and potentially more elusive, analysts say. Any agreement with the IMF must be approved by the fund’s board and a Sri Lankan government willing to undertake reforms. The country’s political parties have started talks to form a new administration.

Private bondholders, who hold slightly less than half the country’s debt, have formed a creditors’ committee led by Rothschild and White & Case, which has led negotiations with the government and the IMF. Sri Lanka is being represented in talks with creditors by Lazard and Clifford Chance, both of which declined to comment.

Sri Lanka’s largest bilateral creditor is China, from which it borrowed heavily to fund projects including a seaport and airport. Beijing is taking a tough stance in debt negotiations with Zambia, which some analysts believe could raise the bar for any restructuring for Sri Lanka.

“What complicates this is how China behaves,” said Anush Wijesinha, an economist and co-founder of the Centre for a Smart Future think-tank in Colombo. “Will they freely and willingly join group discussions? Will they hold out? Will they want more preferable conditions?” 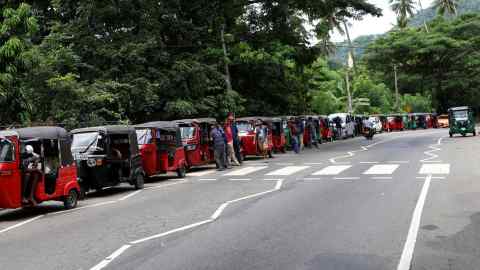 For now, analysts said, rescue talks would wait for events on the ground. “Politics will trump economics for the coming week at least,” Wijesinha said. “Everything else will take a back seat until this is resolved.”

Meanwhile, as political discussions continue, people are going hungry. The UN World Food Programme estimates that more than 6mn of Sri Lanka’s 22mn people do not have enough to eat. The cost of feed has forced many poultry farms to close, and fishing boats are staying in port because they lack fuel.

“There is no deep-sea fishing as there is only a limited issue of diesel and kerosene,” said Nishantha Kumar, a Colombo fish vendor. “Fish retail prices have almost doubled.”

Will Voters Be Motivated by Abortion? Or Is It Just Democrats Wishcasting? – RedState

Republicans Need to Learn the Lesson From RINOs Who Try to Appease Democrats Only...

DeSantis Understands Power Better Than Any Other Republican