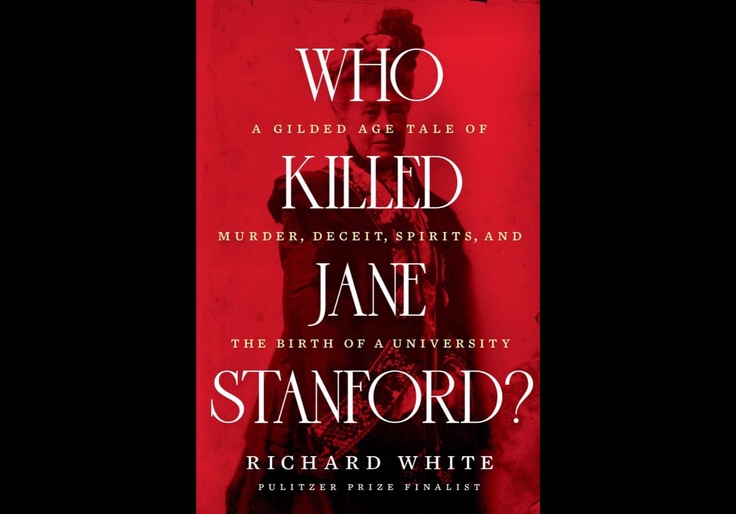 Jane Stanford could have been saved by a fart. That, at least, is what her doctors, friends, and community accepted in 1905 when the cofounder of Stanford University spoke her last words: “This is a horrible death to die.”

A physician claimed that Mrs. Stanford overate at lunch and had considerable gas, which prompted a heart attack. The president of Stanford University refused to accept that Jane’s death was unnatural. Members of the Stanford family repeated the lie that Jane died of heart failure.

Historian, Stanford University professor, and two-time Pulitzer Prize finalist Richard White rejects this relayed account and swaps it for one more interesting: murder. As White explores in his new book Who Killed Jane Stanford?, the philanthropist had powerful enemies. Many of them were involved in an elaborate plot to kill the heiress and seize her estate for themselves. In his detailed account of the Gilded Age mystery, White dives into the century-old cold case and at last names a killer.

Just before bed on the evening of January 14, 1905, Jane drank from a glass of Poland Spring water. She immediately detected bitterness and began to vomit. Jane called in her secretary Bertha Berner, who agreed that the water tasted peculiar. Toxicology reports showed that Jane was poisoned by strychnine, a chemical commonly found in rat poison. She survived that occasion.

To recover from the stress of the incident, Jane vacationed at the Moana Hotel in Honolulu, Hawaii. On February 28, just six weeks after she was initially poisoned, Jane retired to her bedroom and drank from a glass of bicarbonate mixed with water. She immediately became ill. Jane again summoned Bertha Berner, who witnessed a series of spasms, during which the heiress declared she had again been poisoned. By the time doctors arrived, it was too late. Physicians concluded the cause of death was a lethal dose of strychnine.

Thousands of miles away in California, Stanford University officials clamored to rule the death natural. A classified murder or suicide could prohibit the university from receiving the widow’s estate—and university president David Starr Jordan couldn’t afford that risk.

It was 20 years earlier that Jane and Leland Stanford founded Stanford University. The couple established the college in memory of their son Leland Jr., who died of typhoid a year earlier. When her husband passed, the college became for Jane “the memorial of a dead son, and of a dead husband.”

Jane was intimately involved in Stanford’s affairs, which, according to the author, vexed Jordan. When she questioned a faculty pick or an administrative decision, it demanded from the university president an agreeable response.

Jordan was a eugenicist who thought the French “dissolute and slovenly,’ he despised southern Italians, and he thought Mexicans were ‘ignorant, superstitious, ill-nurtured, with little self-control and conception of industry or thrift.'” He also viewed Stanford as constantly overstepping her authority—but Jordan subordinated those views in exchange for the cushy title. He ignored Jane’s concerns over college management until she threatened that position. He even “said in confidence to certain students that things would be better at the University when she had passed away.”

The president was no stranger to scandals, including the abrupt termination of faculty members for representing opinions contrary to the administration’s. In 1903, a professor blamed the “liar, hypocrite, and coward” Jordan for his unusual power to haphazardly hire and fire faculty members. Jane planned to terminate Jordan shortly after her February trip to Hawaii.

The control Jane sought in the university’s inner workings alarmed Jordan. She could be temperamental and selfish, and, with such a large chunk of the university’s endowment under her control, Jordan had to be strategic in their partnership. But the president wasn’t the only person close to Jane who manipulated her for money.

Jane paid well her close friend and personal secretary of 30 years, Bertha Berner, who accompanied her on many overseas travels, including that last and fatal trip to Hawaii. Berner inherited $15,000 and a home when the heiress died—and the maid was present for not one, but two instances in which her boss was poisoned.

White introduces a host of other players who likely played a part in Jane’s death: the corrupt law enforcement officers who botched the investigation, shady private detectives who ignored toxicology reports, house servants who stood to gain substantial inheritances. All of these fall short next to the killer White finally names.

Jane dedicated herself, her wealth, and her family’s memory to the university. A staunch spiritualist with Christian influence, she was “as close to Catholic as a Protestant could be.” The Stanfords claim that their deceased son visited them in a vision and encouraged the couple to live for humanity and “build a university for the benefit of poor young men, so they can have the same advantages the rich have.”

Jane Stanford lived for humanity. But in death, humanity deserted her. White’s investigation is a thrilling tale of Gilded Age deceit, wealth, and death. Rest assured, his conclusion is much more riveting than flatulence.

Who Killed Jane Stanford? A Gilded Age Tale of Murder, Deceit, Spirits and the Birth of a University
by Richard White
W.W. Norton, 384 pp., $35

US diplomats to reopen embassy in Kyiv

With Overturn Of Roe, U.S. Will Have Looser Abortion Laws Than Europe